A Present-Day Vision of Virtuosity. The album LEGEND premieres on 24th June! 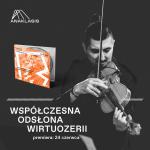 The album LEGEND from ANAKLASIS opens with Kuyawiak. “This was my first encounter, still as a child, with the music of Henryk Wieniawski. I remember that the beautiful opening motif moved me so deeply that it has come back to me ever since whenever the composer’s name is mentioned,” Bałdych recalls. He has already taken up this Kuyawiak once before, on the ANAKLASIS label’s album GREAT ENCOUNTERS, marking the 75th anniversary of PWM Edition. In that recording he is accompanied by AUKSO Chamber Orchestra of the City of Tychy under Marek Moś, as well as Krzysztof Dys on the piano and Marcel Comendant on the dulcimer. If we listen to these pieces one after the other, Bałdych’s new Kuyawiak, subtitled Sleeping, seems to pick up where the former version has left, continuing the story and explaining what happened when the sonorous kuyawiak shook off the orchestral dust. Apart from Bałdych’s virtuosity (on the contemporary and Renaissance violins), the CD LEGEND also features Marek Konarski (tenor saxophone), Łukasz Ojdana (piano), Michał Barański (double bass), Dawid Fortuna (drums), and Agata Szymczewska (violin).

Colours, their combinations and interpenetrations, are a particularly intriguing aspect of the CD LEGEND. Agata Szymczewska plays a 1755 Nicolò Gagliano violin, on loan to her courtesy of Anne-Sophie Mutter. Bałdych performs, apart from his contemporary instrument, also on a copy of a Renaissance model. The musicians experiment, looking for new colours and sonoristic techniques. Still, they never forget about the melody, which, in its simplicity and directness, makes it possible to communicate with the audience and successfully to attract it into his own world.

“I draw on history, but I approach it in a highly individual manner. My explorations are directed towards Wieniawski and his interest in folk music, but I also introduce many new contexts. On LEGEND, Wieniawski’s melodies are in some cases quoted in a nearly unaltered form, but they soon become motifs that undergo modern, sonoristic-type transformations,” Adam Bałdych explains.

What brings together Bałdych, Szymczewska, and Wieniawski is Polish contemporary music, their passionate search for profound violin expression, and the constant exploration of new paths. “I do believe that this project aptly represents an idea that is of great importance to me, namely, that of crossing and blurring musical boundaries. LEGEND is thus an invitation to the entire classical music world to rediscover the violin repertoire and listen with a fresh mind to the music of its masters,” Bałdych concludes.

LEGEND is the eight album in the REVISIONS series, which presents music-lovers with experiments, boundary crossing, revolutions, and, most of all, the legacy of composers who come from different musical worlds. The album containing “variations on Wieniawski” will be available from the best bookstores and music shops, online services, as well as the virtual shop of the empik chain as of 24th June.