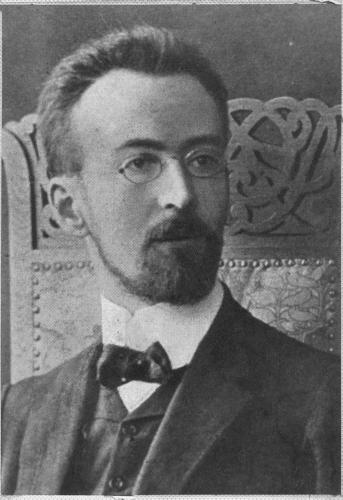 Mieczyslaw Karłowicz is a crucial figure in the history of Polish music. Born on 11 December 1876, at Wiszniew in the Swieciany district of Lithuania was the youngest of the four children born to Jan Karlowicz and Irena of Sulistrowski. His father was an eminent linguist and ethnologist, and at the same time a great lover and connoisseur of music - he played the cello and the piano, held quartet evenings in their house.
Since early childhood Mieczyslaw was surrounded by music and art. During his visits in Heidelberg, Prague and Dresden he was acquainted with symphony and opera music, among other things with works by Bizet, Weber, Brahms and Smetana. His musical education started in the age of 7. He studied violin under Jan Jankowski and then Stanislaw Barcewicz, and at the same time he attended lessons of harmony, counterpoint and musical forms. After unsuccessful attempt to get into Joachim's class, he concentrated on composition undertaking studies under Henryk Urban. At the University in Berlin he attended also lectures on musicology, philosophy, psychology and physics.

During his studies in Berlin (1895-1901) he completed his songs. Non fewer than 10 of the 29 are drawn on verse by Kazimierz Przerwa-Tetmajer, one of the leading lyric poets associated with the Young Poland movement They are concerned with themes of love and death, seeking contact with the Absolute through love and nature, they display moods of melancholia, disillusion and inertia.
Karlowicz concluded, however, that perhaps music is incapable of soaring higher than poetry, but she can certainly fly somewhere else, in another direction" and abandoned vocal writing concentrating on pure music".

On 8 February 1909 he died in an avalanche in his beloved Tatra mountains at the tragically early age of 33. The work was completed and orchestrated by Grzegorz Fitelberg, a distinguished Polish composer and conductor.
Although Karlowicz's legacy is comprised of 14 opuses only, its significance for Polish music is enormous. Since 1797, when under the terms of the third and final treaty of partition, Russia, Prussia and Austria pledged themselves never to include in their titles the name or designation of the Kingdom of Poland, which shall remain suppressed as from the present and for ever", Polish composers devoted themselves to keeping alive the Polish idea through music. It prevented them from keeping pace with musical developments in the rest of Europe. The national style of the second half of the 19th century was based on superficial nationalist gestures imposed on derivative musical models which had long been obsolete in other musical centres.

Karłowicz was the first Polish composer who forged progressive models of expression which could bear comparison with those employed by the leading representatives of the contemporary European mainstream. His masters were Wagner and Strauss. He is conventionally regarded as the archetypal Young Poland" composer, not because of any association with the Young Poland in Music Publishing Group", but because his art reflected the spirit of the Young Poland literary movement.