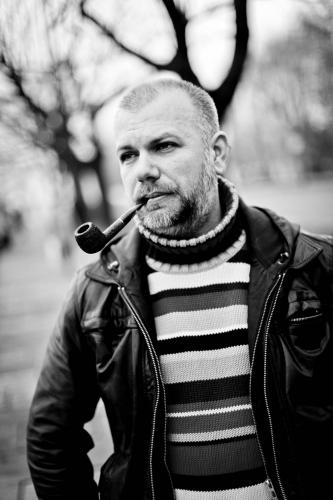 Born 1971, Marcel Chyrzyński obtained his Master's degree (with distinction) from the Academy of Music in Krakow in 1995, where he studied composition with Prof. Marek Stachowski, orchestration with Prof. Krzysztof Penderecki and computer music with Marek Chołoniewski. He perfected his compositional skills with Richard Boulanger, Cindy McTee and Rodney Oaks. He has gained valuable experience and training under the tutelage of composers such as Paul Paterson, Sylvano Bussotti, Claude Lefebvre, Joji Yuasa, Bogusław Schaeffer, Lidia Zielińska and Hanna Kulenty.

Since 1994 he has worked as a lecturer (since 2010 as an associated professor) at the Academy of Music in Krakow in the Departament of Composition, Conducting and Theory of Music. In 1998 he was awarded a doctorate in composition, and the professorial qualification in music arts in 2010. Since 2014 he has been a director of the Institute of Composition, Conducting and Music Theory. He has been invited as guest lecturer to universities in Mexico, RSA, South Korea, Slovakia, the USA and Japan.

Among many Polish awards and citations, Chyrzyński has twice received 1st prize in the Andrzej Krzanowski Competition for Young Composers in Bielsko-Biała for Miniature for solo clarinet and for Three Preludes for clarinet and piano, 1st prize for Four Love Lyrics for baritone and piano in the 3rd All-Polish Adam Didur Composers' Competition in Sanok (1994), citation for Piece for Orchestra in the Composers' Competition organised by Polish Radio in Warsaw (1996), 3rd prizes for Psalm 88 and ...similes esse bestiis, both for mixed choir in the All-Polish Composition Competition Musica Sacra in Warsaw (1996, 1997), and 1st prize for Ferragosto per tromba, pianoforte e batteria in the Tadeusz Baird Composition Competition for Young Composers in Warsaw (1997).

Last from the mentioned compositions as well as Quasi Kwazi I and Quasi Kwazi II, were perfomed at the Dimensions of Time and Silence concert which presented Polish and Australian music in Sydney (1998). His Extended Perception of Echo for Strings represented Polish contemporary music at the International Fair Midem Classique 2000 in Cannes.

International Festival of Krakow Composers has been run by Marcel Chyrzyński (director) since 2014.