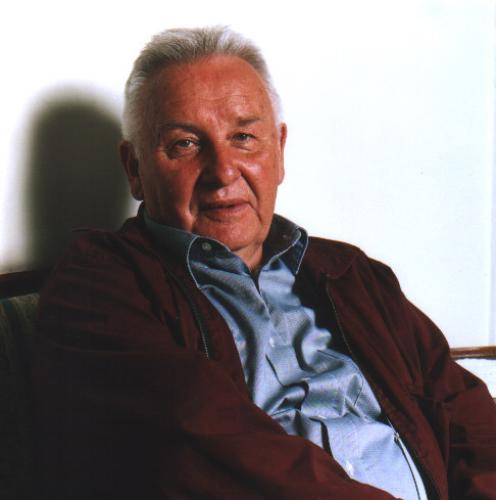 Born on 6 December 1933, Górecki studied composition with Bolesław Szabelski at the State Higher School of Music (PWSM) in Katowice (1955-1960). After a post-graduate sojourn in Paris, he became a professor of composition at the PWSM in Katowice, and - in 1975-1979 - its Rector. As a composer, he has been known and respected in Poland, but not well-known around the world. The phenomenal success of his Symphony no. 3 (Gramophone's "Best-selling CD in 1993") has astounded many of his contemporaries, especially in Poland, where the work had been known for more than a decade. In his home country Górecki's Third was perceived as one of a series of fascinating compositions, the result of a long and complex creative evolution.

Górecki has worked with great determination to develop his own compositional voice, through assimilating the techniques of his predecessors (Bartók, Szymanowski) and those active around him (Boulez, Xenakis, Nono), and then paring away all elements extraneous to his personal expression. These processes were carried out through the 1950s and 1960s, beginning with the Four Preludes for piano from 1955, his first numbered opus, and reaching full maturity with Old Polish Music from 1969. This is the most radical and dissonant period in his output: in the 1960s, Górecki belonged to the small group of the most avant-garde composers of his time. Together with Penderecki, Serocki, and others he established a pattern for new music: the more dissonance the better, the harsher the sounds, the better. This style of writing, associated with the so-called "Polish school of the 1960s" is alternatively known as "sound mass composition" or "sonoristic composition" - a name taken from "sonorous" or "sounding." In order to reduce music to pure sound, these composers stripped away all elements, except tone colour. This path to the essentials is encapsulated by Górecki's Genesis cycle (1962-1963) and the aggressive Scontri for large symphony orchestra (1960) - a work filled with clashes of vertical and horizontal sound patterns, often organised serially.

During the 1970s, beginning with Ad Matrem (1971) and continuing through to Symphony No. 3 and Beatus Vir (1979), Górecki worked to achieve a direct link between the emotional and spiritual content of texts, both sacred and traditional, and his musical architecture. He sought inspiration in early Polish music: a 13th-century conductus, a 16th-century polyphonic song... . The focus on vocal music throughout this period led quite naturally to an emphasis on melody, with a resulting simplification of the harmonic and textural elements. This gradual progress away from dissonance towards consonance, away from aggressive, dramatic, intense music, towards a more mellow style can be witnessed on the pages of Symphony No. 2, Copernican (1972).

The 1980s saw an expansion of Górecki's compositional resources to encompass radical contrasts in tempo, dynamics, density and harmonic dissonance. These elements cooperated to create a unified, highly concentrated musical expression, manifested in a remarkable series of chamber works, from the trio Lerchenmusik (1984) to Little Requiem for a Polka [Kleines Requiem fur eine Polka] for an ensemble of fourteen instruments (1993). These compositions resound with echoes of Chopin, Beethoven, and Szymanowski. They also draw inspiration from colours and rhythms of folk music: the strong accents, harsh timbres, and relentless ostinati of mountain dances from the Tatras and Podhale region, the melancholy clarinet tunes of Silesia, the impetousness of the Czech--or Silesian--polka. There is so much to admire!.

Symphony No. 3 comes just about the halfway point in Górecki's output to date. For many people, his achievement as a composer is fixed there. It should be known, however, that he has moved on, far beyond, while at the same time carrying forward the musical, emotional and spiritual concerns with which he has been preoccupied from the beginning. For, as the composer states, "music is one of the domains that people really need, and its importance only depends on whether one knows how to receive it."