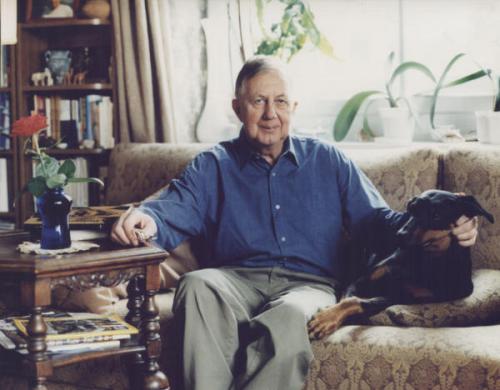 He was born on August 23rd, 1925 in Warsaw. He studied under Piotr Rytel (composition) and Maria Klimont-Jacynowa (piano) - obtaining diploma in 1951. He also took private lessons with Tadeusz Szeligowski. After 1950 he began to be interested in Polish mountaineer's folklore, what exerted influence on his compositions and published theoretical works either. Between 1957 and 1961 he was taking part in The International Summer Courses of New Music in Darmstadt. That time he associated with the Experimental Studio of Polish Radio he was also working with other foreign studios of electronic music - in Köln (Westdeutscher Rundfunk, 1966-67) Stockholm, Freiburg, Paris (Groupe de Recherches Musicales ORTF, 1970) and Bourges. In 1970 and 1971 he received the Berliner Künstlerprogramm Scholarship in West Berlin.
Since 1967 he has lectured composition and managed of Studio of Electronic Music at the Academy of Music in Warsaw. The circle of his students is made of such excellent composers as Paweł Szymański, Hanna Kulenty, Stanisław Krupowicz, Tadeusz Wielecki, Edward Sielicki, Jacek Grudzień, Paweł Mykietyn.
Włodzimierz Kotoński was also invited to lead on tour lecture of composition and electroacustic music at foreign universities: The Royal Academy of Music in Stockholm (1971), The State University in Buffalo (1978), The University of Southern California in Los Angeles (1982), The Rubin Academy of Music in Jerusalem (1989) and Conservatory in Alkmaar (1993).
In 1972 he obtained his doctor's degree and since 1990 he has been a professor. Włodzimierz Kotoński fulfilled many public duties. From 1974 till 1976 he was editor-in-chief of Polish Radio and managing music director of Polish Radio and Television. Between 1980 and 1983 he hold a rank of vice president and since 1983 till 1989 - president of The Polish Society of Contemporary Music (Polish section of ISCM). He was awarded by Minister of Culture and Art (1973), Polish Composers' Union (1976) and Chairman of Board for Radio and Television Affairs (1979)
Włodzimierz Kotoński's creative output is extremely rich and varied: from instrumental solo music, through chamber, orchestral, vocal-instrumental, instrumental-electronic works, music for tape, instrumental theatre to theatrical and film music. It is also complemented by theoretical work concerning mountaineer's folklore and percussion instruments. Włodzimierz Kotoński died on September 04, 2014 year.