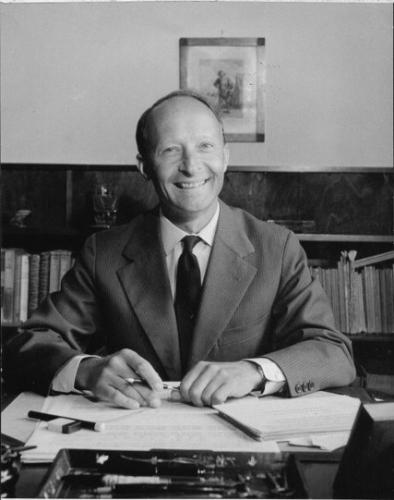 The composer, pianist and conductor, Witold Lutosławski, a leading figure in Polish music of the second half of the 20th century, was born in Warsaw on 25 January 1913 and died there on 7 February 1994. He studied piano with Jerzy Lefeld and composition under Wiktor Maliszewski, at the Warsaw Conservatory, graduating in 1936 and 1937, respectively. He also studied mathematics at the Warsaw University (1931-33). His first significant achievement as a composer was Symphonic Variations (1938), which was favourably received by both audiences and critics.

The Second World War interrupted his promising career as a composer. Lutosławski was involved in the struggle with the Germans in September 1939 and during the German occupation of Poland resided in Warsaw, earning his living as a pianist playing duets with Andrzej Panufnik in Warsaw cafes. The many transcriptions made by him at that time included Variations on a Theme of Paganini for two pianos composed in 1941 and still popular.

After the war his activities as an artist and composer became more intensive. He completed his First Symphony (1947) and made his debut at the "Warsaw Autumn" International Contemporary Music Festival in 1956 with his Little Suite (1950) and the Concerto for Orchestra (1954). Funeral Music, performed at this festival in 1958, earned him international fame with the first place at the UNESCO International Composers' Tribune in Paris (1959) as well as numerous performances throughout the world. Lutosławski was also awarded the UNESCO prizes for Venetian Games in 1962, Three Poems of Henri Michaux in 1964 and the Second Symphony in 1968.

Lutosławski also acted as a conductor focusing exclusively (from 1963) on the preparation and direction of his own works. He performed with many excellent soloists including Mstislav Rostropovich, Sophie-Anne Mutter and Krystian Zimerman as well as with world-famous orchestras. He sat on the juries of many composition competitions and participated in numerous international festivals. At the same time he gave (from 1962) courses for composers, lectures and seminars on music and composition in European and American musical institutions, increasingly presenting his own works exclusively.

He participated in the activities of many institutions and played a leading role in the Polish Composers' Union, the UNESCO International Musical Council, and the Programme Council of PWM Edition. In 1989 he became a member of the Citizens' Committee attached to the President of the "Solidarity" Independent Self-governing Trade Union and, in 1990, a member of the Polish Cultural Council.