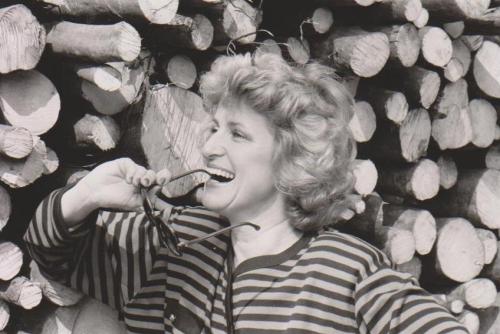 Joanna Bruzdowicz born 17 May, 1943 in Warsaw, Polish composer, music critic, journalist. In 1966 she completed her composition studies under K. Sikorski at the PWSM in Warsaw. During her studies she began her concert piano activities, performing in Belgium, Austria and Czechoslovakia.

She was co-founder and from 1964-1968 secretary general of "Jeunesse Musicales". In 1968 she received a scholarship from the French Government and to 1970 she studied composition in Paris with Nadia Boulanger, Olivier Messiaen and Pierre Schaeffer, and musicology under the direction J. Chailley at the Sorbonne. In 1969 she was a co-organizer of Groupe International de Musique de Paris Electroacoustique (GIMEP).

In addition to composition Bruzdowicz also undertakes criticism and music journalism. She is an author of French, Belgian and German radio broadcasts to promote new music. She has performed readings and also written screenplays for French and German television together with her husband, H.J. Tittel.

She has led courses in composition, mainly in France and the United States. She is the founder and president of the Fryderyk Chopin and Karol Szymanowski Society in Belgium and Vice-President of the International Federation of Chopin Societies, and organized an international music meeting in Céret (France). Joanna Bruzdowicz has Polish and French citizenship. Since 1975 she lives in Tervuren, near Brussels, and since 2002 in Céret, in the French part of Catalonia in the Pyrenees.